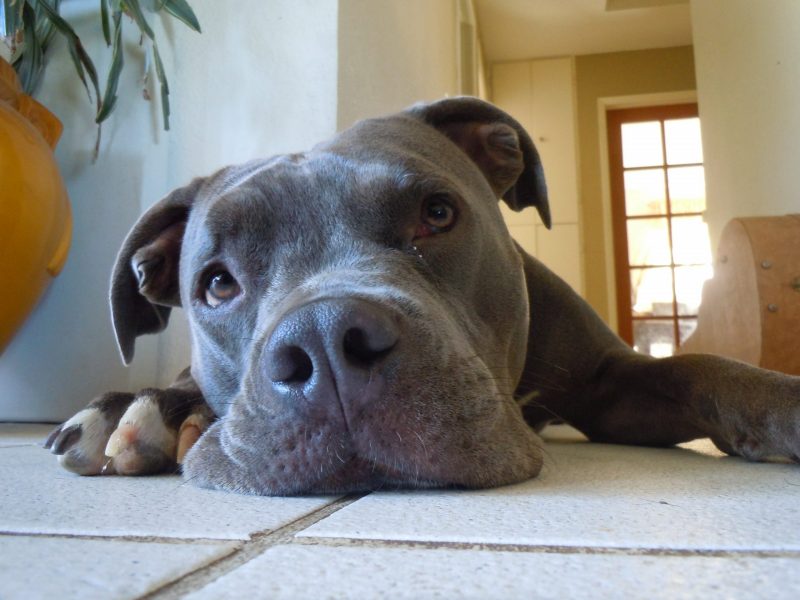 Pitbull owners would tell you that their pets are energetic and active, so you might be wondering why is my pitbull so lazy? Although there is a negative connotation about this particular dog breed, pitbulls are little by little known and accepted by people as friendly dogs.

In general, they have rambunctious and playful temperaments. However, they can get a bit lazy sometimes. If by chance, you are a pitbull owner who is concerned due to the sluggish behavior of your companion, then you have clicked the proper link. In this post, we will go over the possible reasons behind the laziness of your dog.

If a person is spending his time simply doing nothing and lying in bed all day long, we would immediately assume of him as lazy or someone who is suffering from depression. But this thinking should not be applied to pitbulls.

You need to ask yourself first if what else did your dog do today. The lives of Pis are pretty simple. They are providing enjoyment and love to the people around them while keeping the family safe by barking at potential intruders to scare them off.

Then, they would sleep for the remainder of the day so that they could avoid getting bored. Try checking the answer to your question: why is my pitbull sleeping so much. Let us put it this way, when no one is playing with them directly, dogs have nothing to do. Although they can drink and eat, it wouldn’t consume so much of their time.

Some pitbulls would entertain themselves by doing various tricks that will amuse you. However, this, too, will only take a tiny portion of the entire day. Other than that, there is nothing much to do left. Not unless your pitbull has some job, perhaps, if the pitbull works at the farm.

Conversely, have you noticed your pitbull turning down a chance to play or take a walk? Or perhaps, it does not bother having some playtime in water or just any other time you have unleashed your dog. Normally, the pitbull would start jumping around due to excitement.

When the playtime starts, you will see their overflowing energy like it is about to explode in their body. In fact, the pitbulls can play for several hours. They have sufficient energy for that. Taking a pitbull for a run will make you feel exhausted immediately despite being an athlete.

What I am trying to say is that pitbulls are certainly not lazy. These dogs only spend a lot of time sleeping if they have nothing much left to do anymore. But try giving them another option; for sure, they would be up for whatever activity you have in mind. For example, you may want to give them one of the nine best herding dog toys to make them feel alive.

6 Possible Reasons Why Is A Pitbull Lazy?

In this section, we will discuss the possible reasons why your pitbull is being lazy lately. There could be several reasons behind this behavior, but we have discussed the six common ones.

Pitbulls, in general, have an enormous drive for playing. Furthermore, they need plenty of physical activities for them to remain healthy both physically and mentally. Therefore, experts recommend that adult pitbulls be engaged in an hour of exercise every day at the very least.

Whatever type of exercise you intend for your Pit does not matter too much. Meaning to say, you may choose to play, jog, or walk with them. However, allowing your pet to exercise regularly will not only strengthen the bond between the two of you but will likewise keep your pet energized.

Take note that if your dog is busy, then it is most likely that it is happy. So you may also consider enrolling your canine in agility classes so that he will be kept occupied.

Another possible reason as to why your pitbull suddenly became lazy is depression. Pitbulls have a strong attachment to the family, so if you leave them alone for a long time, the chances are high that separation anxiety will develop, which can eventually lead to depression.

Some other occurrences that may lead to depression include moving and having a new family member such as a pet or child. If you do not give them enough attention, it can also make them depressed. If your canine is showing signs like lack of interest in activities or appetite, then it possibly has depression.

If that is the case with your Pit, try to spend more time with it to see some improvements in its behavior. You can also give it a bit more attention. Also, try brushing its hair for grooming. This can relax the dog, and it also helps in having a better connection with it since it shows affection and care.

Given that pitbulls belong to the category of muscular dogs and have immense energy drive, their diet should be rich in nutrients. In total, the diet must include enough amounts of phosphorus, calcium, fats, protein, and other crucial ingredients. You may also want to know the answer to your question: how to make my pitbull gain weight.

When your dog has not performed any physical activity for the day, it may become lazy. That may be the answer to your question: why is my dog so lazy. Without exercise, the dos may experience health issues or behavioral problems.

A dog parent cannot stand it if their pet has developed some health condition. Furthermore, having an illness may potentially cause the pitbull to have a lower energy level.

If your pet is experiencing some symptoms and being lazy such as vomiting, urination, gagging, coughing, diarrhea, refusing to eat, runny nose, etc., you should visit the vet immediately.

As mentioned, pits are energetic. But just like humans, each does have a personality unique to them. Some canines are naturally calm. Your pet possibly dislikes moving around excessively. However, if the dog just recently developed such calmness, it is best to have it checked by your vet.

After you have known the answer to the question: why is my pitbull so lazy, now it’s time to do something about it. Follow the expert’s recommendations above. Then, go see your vet, make them active, and the likes.