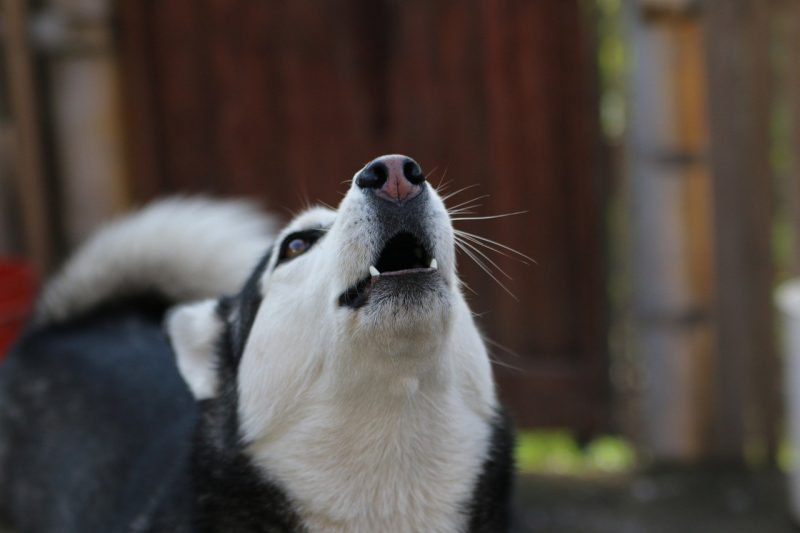 It reminds me of my dog’s regular howling, but why does my husky howl? Unlike other breeds of dogs, huskies do not bark a lot, but they often howl—this is their means of communicating. In addition, howling among huskies is associated with their wolf roots.

Howling is used because it makes detecting one another easier when in the distance as compared to barking. Huskies today continue to use howling, whining, and even talking due to their ancestors.

Although domesticated huskies do not need to howl anymore in communicating through forest and snow, there could be various reasons why a husky howl is helpful for you as the owner to know what it means when your pet does it. Let us take a look at those reasons below.

A husky howl is pretty much like wolves since they are related to them. Put the photos of a wolf and husky next to each other, and you will see that they indeed look like cousins. However, they look more relaxed as compared to other breeds of dogs. To understand why your husky how, look at the way wolves are howling in the wild.

If a wolf gets separated from its pack, it will howl in calling out for its pack. The bark is also loud, but its short sounds would be complex for other wolves to locate. Since the howling sound is long, it will be carried through the wind making it easier to pinpoint.

Think about those vast ships that utilize a long fog horn and not short beeps. That is because it is easy to identify the direction upon hearing the sound of foghorns. The same is true with howling; it will carry its long sound through the air so other dogs can quickly identify its source. It’s a good idea to read this article about how to cool down a husky.

Why Does My Husky Howl At Crying Babies Or Sirens?

It is no longer a surprise that he will also join when your dog sees another dog howls. This is not only triggered by the other dogs. In case a siren is heard, the husky may also start to howl and whine.

Huskies respond to sirens by instinct. Technically, their instinct will hear the siren sound as another dog from afar calls out for them, which is why they respond to the call by also howling.

An example of a husky’s instinct is when there is a lost husky that howls to call the attention of other members of the pack. The others will respond as soon as they hear this so that the lost one can find its way to them.

Although the siren of an ambulance is only artificial, the Huskies won’t understand this. They would hear this as another husky asking for help. Another example is when a baby cries. It is hard to comprehend the reason why huskies are howling when a human baby is crying.

Some experts believe that huskies recognize that babies cry when in distress, so they would howl to respond. Of course, we cannot know what is going through a husky’s mind when they hear babies crying, but it seems more likely that they recognize the baby’s distress when it cries.

Another possibility is that the husky is trying to catch your attention when he hears the baby cry. For example, your pet might want you to come quickly since your baby needs you. Husky owners often find their pet that is trying to soothe the baby when it cries. You may also be interested to know about how to calm down a husky.

When Do A Husky Starts To Howl?

Surprisingly, huskies start to howl early as when they are still puppies. This is because the puppies find it easier to talk, whine, and howl than bark. But the howl of a puppy is not the same as that of older huskies. It lacks resonance and power. However, it’s no mistake that they are howling.

As mentioned earlier, other dogs, sirens, and crying babies can often trigger a husky to try howling. Sometimes, a harmonica may also be enough for a puppy to start howling.

In as early as seven weeks, young, husky can howl. This age may seem too young, but huskies attempt to howl starting at that age or even earlier. In some cases, they cannot get this sound right. But to attempt, they are lifting their heads just like how other dogs do when they howl.

What Does It Mean When A Husky Howl?

The howling of a husky can mean different things. They howl to respond to various situations. With that being said, it can be hard to determine why your husky is howling and what it is trying to say.

Typically, a husky is howling due to excitement, playfulness, hunger, loneliness, or boredom. Other than this, there could be other reasons why they do this. For example, your husky may want to capture your attention which is why they howl. Look closely at your pet to know why your Pet howls.

For instance, if you are away and you arrive, your husky may start to howl. This is a sign that your pet is excited to see you. At last, he is not alone anymore. He would want to get attention now that you are there with him. On the other hand, if you are about to go to work, the howling of your husky would mean the opposite. I guess it’s helpful to read about how to deal with an aggressive husky.

Knowing why does my husky howl is complicated since a howl does not have a single clear meaning. This is our pet’s way of communicating with us, and they use this in various situations. As you look closely at your dog and try to understand its behavior, eventually, you will get to understand the meaning of why do huskies howl.