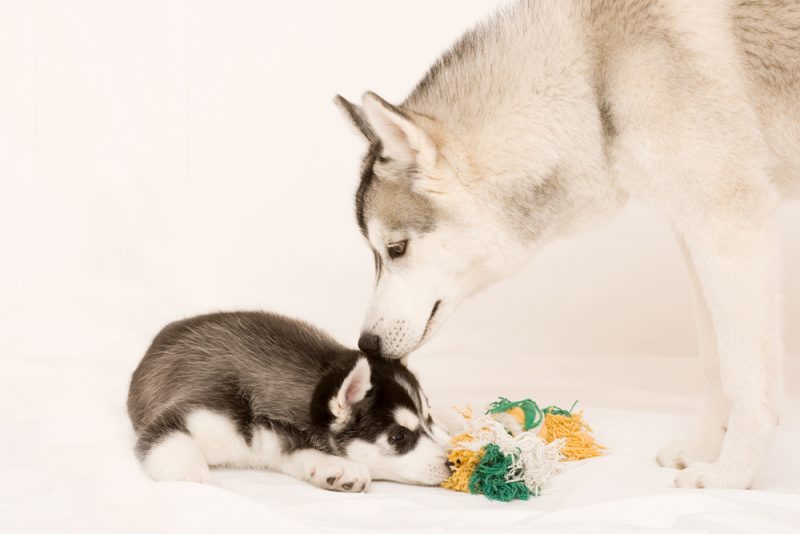 Some pet owners sometimes wonder: why does my husky attack small dogs? There could be various reasons behind this. This article will learn about those and what you can do to prevent and stop your husky from attacking small dogs.

The most plausible reason for the attack is the prey drive that is innate for huskies.

Some other reasons are rewarding the behavior inadvertently or showing dominance. When identifying the cause, you should consider several things. You can also do many things to stop this from happening.

Reasons Why Does A Husky Attacks Small Dogs

We have mentioned the common reasons above as to why a husky attacks small dogs. This section will go over each of them to better understand your dog’s particular behavior. So, why does my husky attack small dogs?

If your husky develops a habit of attacking other dogs, especially the smaller ones, it can be attributed to his prey drive. Huskies naturally have a solid drive to prey on others since their ancestors need to hunt to survive. They are known to kill animals smaller than them. It is recommended that you separate small pets from your husky if possible unless you are confident and you trust that your husky will not attack them anymore.

This habit is also associated with dominance. You would more expect the attack from dogs that do not listen to the command of their owners and instead see themselves to be more powerful than you. If your dog seems to exert dominance, you need to train it properly until your dog understands that you should be the leader around the house. He should behave the way you want him to be. Read how to calm down a husky.

#3. Your dog is not exposed to others

The lack of socialization with others when he is still a puppy would make it more likely that your do will attack small dogs as he grows up. That is because he will not see other dogs as friendly. This perception, combined with his prey drive, can make your dog more aggressive when seeing small dogs. What you can do is to help your husky in socializing with other dogs. It would help if you did this in a restrained environment. You may also read about how to deal with an aggressive husky.

#4. You encourage the behavior inadvertently

It is also possible that you have trained your dog to become aggressive around other dogs without you knowing. When trying to stop him, this can happen when you give your dog the things he likes, such as toys or treats. Instead of doing this, you can learn to recognize the time that your husky is about to become aggressive. Then, try to redirect his focus by commanding him. You can start by training him to follow the sit command. It may be a good idea to know how to stop Chihuahua aggression.

Being protective is another reason why your husky attacks small dogs. This is especially true when you notice that your dog gets aggressive only to dogs that are being aggressive also.

How To Stop Your Husky From Attacking Small Dogs?

To stop your husky from attacking dogs that are smaller in size, you can use several ways. So if your pet develops this habit, you can consider the following methods.

You should then stop showing the treat to your pet and continue to reward him every time he sits down when you tell him so. Your dog must be trained to listen to you so that it is easy to control him whenever other animals are around.

If you have no other dogs at home, it is easy for you to prevent your dog from attacking those smaller than him. All you need to do is keep him away from other dogs if possible.

But if you have small dogs in the house and your husky has to live with him, you should separate them. Still, it is best to train your pet to behave well when small dogs are around. For you to do this, you can leash both your husky and your small dog in one room.

You can also shift the focus of your pet to you. You can do this by commanding him to do some things like sitting down, for example. Then, reward your dog for focusing on you. Allow your husky to slowly get near small dogs and continue to reward him for keeping his focus. Repeat the process until you ensure that the small dog can roam around him slowly.

#3. Redirecting the attention of your dog

Hopefully, this post has answered your question, “Why does my husky attack small dogs?” and since you already know the probable cause for this behavior, you can quickly solve this issue. Then, you can consider the methods above.