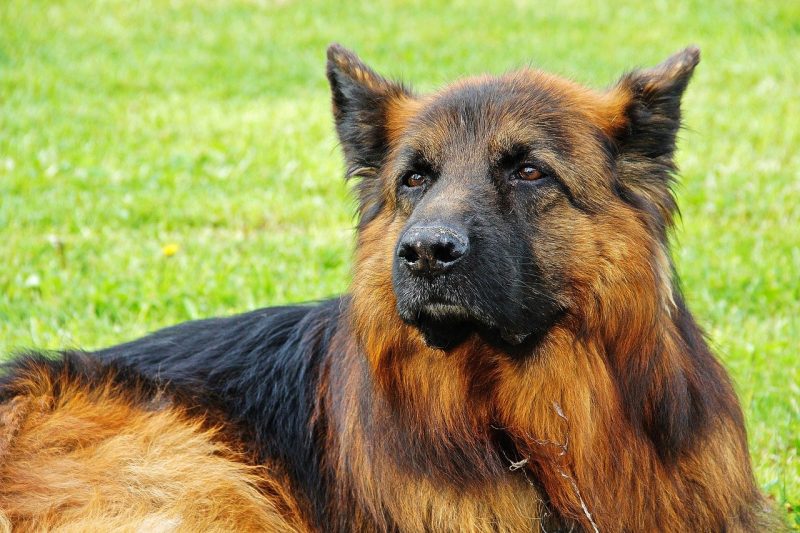 Are you wondering why does my German shepherd stink? A variety of factors might cause your German shepherd’s odor. It might have health issues such as foul breath, unhealthy molars or teeth, ear infections, or frequent diarrhea difficulties. It might also result from crawling in stinky stuff, an unhealthy diet, or exposure to water.

Like every other breed of dog, German shepherds aren’t particularly stinky. All dog species have their unique characteristic odor, which you will assume from this breed. German shepherds, too, have such a more significant potential for odor because of their type of hair and long coat.

There seem to be various health issues linked to foul odors. Your German Shepherd’s poor breath may be caused by diabetes or kidney failure. It’s natural for a dog’s breath to stink a little, but if it’s awful, it might indicate a health problem.

Gums and teeth disease can also produce unpleasant breath. Excessive drooling can be caused by decaying gums and teeth that can get stuck in their hair and make it stink even worse. Infections due to bacteria in the eardrum can also cause them to stink. It is usually followed by a lot of head shaking, and some flatulence is natural, but a great deal of it might be attributed to gut difficulties.

If you suspect that your German shepherds’ poor odor is due to a health issue, you must take him to the veterinarian to be tested out. Here are the common health problems German shepherd.

An unhealthy diet might be an additional reason for German Shepherds stinking. A poor diet might cause poor breath and excessive flatulence. If you suspect that the German Shepherd’s food is to a fault, speak with a veterinarian and seek assistance improving their nutrition.

If you have ever taken onion or garlic and then discovered that your perspiration or breath smelled for hours afterward? Your dog is subject to the exact rules! Most dogs are lactose intolerant; therefore, it’s better to keep lactose out of your dog’s diet entirely. If you’re not sure exactly to feed your German Shepherd, look for dog chow made exclusively for German Shepherds. You can find German shepherd dog biscuits here on Amazon and Chewy, and you can see this for GSD pups here.

Find out why is my German shepherd so skinny.

Grooming is required for German shepherds. A shower is advised now and again, but it is especially vital to become filthy or mud during a stroll. In any case, they do need to be brushed daily because their coat can get extremely untidy, but they’re a breed that sheds a lot. Brushing their teeth at a minimum once per day is required because bacteria in the tongue can promote dental caries, contributing to various health problems. It’s also one of the most prevalent causes of foul breath.

Dogs’ ears also have to be wiped since bacteria in drums may promote ear diseases; you’ll find that if the ear wax within your puppy’s ear piles up and isn’t cleaned on a routine basis, it can start to stink. While you can still typically wash your dog’s ears alone, a dog trainer or veterinarian may perform it for you if you possess any worries in doing so.

We hope that reading this article is just fun for you, and after reading it, you all will understand why does my German shepherd stink. Above, we have discussed five leading causes that lead to this problem. Just keep in mind that proper grooming of your GSD helps you keep them clean. Thank you, friends, for being with us at the end!