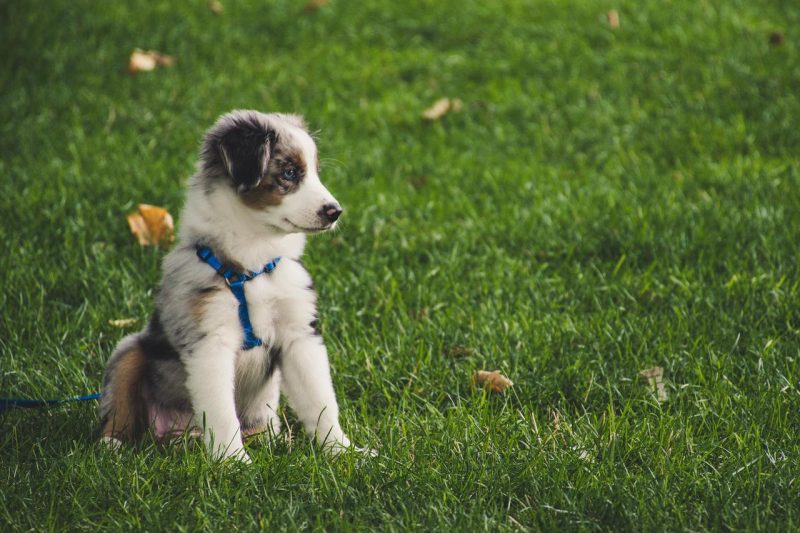 In this post, we will tackle why this has become a breed standard. We will also discuss whether or not the shortened tail serves a purpose. The tail-docking is primarily done to adhere to the cosmetic breed standard. But this is also done to avoid tail injuries. On the contrary, this was done in the past because it is believed that this can enhance work performance as well as improve the hygiene of the dog—more on this below. Keep reading!

Before we get into the reasons behind why tail docking is carried out among Australian shepherds, let us first understand the term tail docking. Have you seen those dogs with stubby or short tails? If so, they most likely have undergone this procedure back when they are still a puppy. This procedure makes the short shorter so that the Aussie will have the “signature look”. Frequently, the breeder is the one that performs it even before you have seen the pup. Through tail docking, the tail is shortened and not removed totally.

Generally, tail docking is performed on puppies aging 3-5 days old. Most people believe that puppies do not endure this procedure since their nervous system has not developed entirely yet.

Such an understanding is highly debated even until now, which is why no general anesthesia is administered when tail docking is performed on young puppies. The vet just cut off the tail quickly using a pair of surgical scissors.

Sometimes, a tail portion is occluded so that the blood supply will be blocked for a couple of days. Tail docking can also be done on older Australian shepherds. Still, the treatment for this is similar to the usual surgical procedure. The dog needs proper anesthesia and surgical aftercare, including antibiotics and medication. If you want to have your Aussie’s tail docked, you need to look for a particular clinic that offers tail docking as one of its services.

Most Aussies would undergo tail docking at one week of age, but this is unnecessary for others. One in every five Australian shepherds is naturally born with a bobtail. This means that they have only one vertebra or two in their tails. Such a trait creates a short tail that is only a couple of inches long. It would be hard to distinguish stubby tails from surgically cropped tails. If you do not ask it from the breeder, you would never know whether or not your dog has a natural bobtail.

The main reasons for tail docking among Australian shepherds are breed standards and cosmetic reasons. But in some cases, it is due to cosmetic purposes. Historically, having long tails is associated with rabies, so they trim the tail to protect the dog.

As soon as this belief has faded, another view is that it can help dogs run faster. Since Australian shepherds are often used for hunting, the procedure is carried out thinking that it will offer extra speed. But none of those beliefs are true, so the reasons for tail docking these days are mainly for breed standards. Some also do this to prevent future tail injuries. When those working dogs assist their owners, the tail often catches burrs and foxtails that harm them.

So the tails are docked to avoid injuries, making the Aussie less efficient. However, numerous Aussies with docked tails are kept in the household with no work. In such a case, tail docking is only done for cosmetic reasons. The breeder is simply adhering to the breed tradition. This is known as one of the signature looks of Australian shepherds, which is why most breeders would dock the tail before those puppies are adopted. This is one of the identifying features of Aussies.

So, why do they dock Australian shepherd tails? The thing is that tail docking won’t be practiced worldwide if it has some advantages. But the positives mainly benefit working dogs since they are more prone to tail injuries.

The enthusiastic tail can be a victim of a condition known as a “happy tail.” This pertains to the injury when the tail hits a hard surface which leads to wounds. Often, it requires treatment. But this can be avoided if the tail is docked.

Since Australian shepherds have long fur, matting often occurs, especially in tails, if it’s not cared for properly. The tail would collect waste, plant material, or other objects. Here’s how to take care of an Australian shepherd puppy.

Tail docking among Australian shepherds is very controversial. Arguments include incontinence and chronic pain. Below, let us discuss the disadvantages that come with tail docking.

Although most breeders believe that puppies will not feel any pain, no scientific evidence can support this claim. They may experience any discomfort.

Although it’s rare, some Aussies experience incontinence, affecting the dog’s ability to hold its bladder properly. This can affect their family line, as a consequence.

Some Australian shepherds that have undergone the procedure have developed chronic pain. This is long-lasting pain that is due to s tumor in the secondary spinal nerve or nerve sensitivity which can cause too much pain in the areas surrounding the tail. Find out how to calm an Australian shepherd.