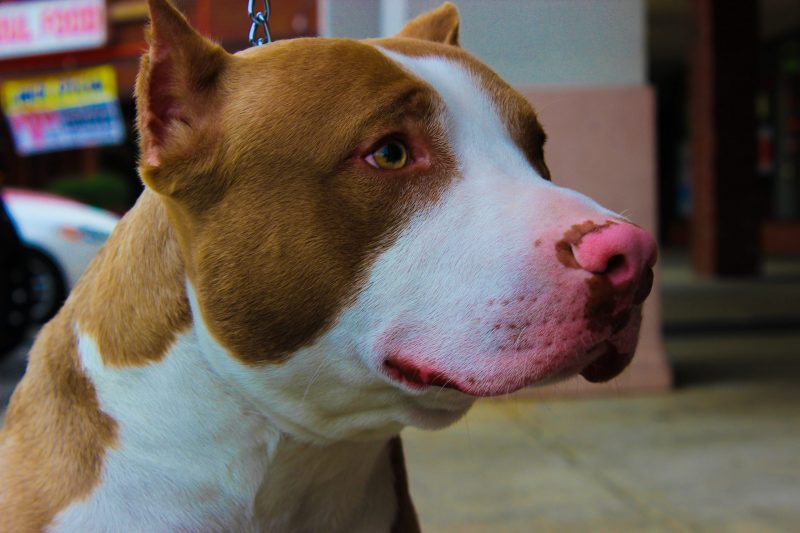 Have you ever wondered why cut pitbull ears? If so, then you will be enlightened about that today. In this post, we will be discussing ear cropping among pitbulls. When we say ear cropping, it pertains to the process of cutting the ears of a pitbull puppy so that it will have an erect look. But to understand this practice more, you need to know why this is done, what process is undertaken to get this done, and the problems that may arise. Then, with all the information provided below, you can decide whether or not it is good or bad to cut the ears of your pitbull.

Essentially, ear cropping a pitbull’s ears is a cosmetic procedure that can make your dog look more ferocious. However, most people already assume that a pitbull is a dangerous dog.

Cutting their ears will only make them appear more intimidating, so it might not improve their image to the public. But why do dog owners still proceed with this procedure?

The process of cropping the ears of a pitbull changes the natural form of the ears. This is done by cutting the portion of the dorsal. As a result, the cartilage will stand erect. Ear cropping is only performed among puppies and not among adult dogs. Typically, this is performed among puppies with an age of about 9-12 weeks. The reason behind this is that the cartilage will grow thicker as the dog grows. This can make the procedure more painful for your pitbull. In addition, it is possible that the ears will not become upright after twelve weeks, so you might not achieve your desired look for your dog.

When cutting ears, the dog must be under total body anesthesia. The process must only be executed by a registered vet who has experience in performing the said procedure. It will take 30-45 minutes in approximate to complete the process.

In doing this, the vet will cut the pinnas into a particular length. Then its edges will be sutured. Once the surgery is done, the ears will be wrapped with bandages to heal into an upright position. The plaster will be left for several days or even a month.

Take note that after the procedure, you’re the ears of your pitbull will be painful and sensitive for a couple of weeks. But do not worry because there are medicines administered to prevent infection and reduce soreness.

According to some, ear cropping can prevent infection among dogs. But the dog may also develop an ear infection following the surgery. So both dog groups with or without cropped ears face the risk of disease. Some also claim that ear cropping improves the hearing of dogs. However, it is not scientifically proven. So the primary purpose of the procedure is only for cosmetics. It may not be beneficial to their health.

Why Cut Your Pitbull Ears?

So, why cut pitbull ears? The practice of ear cropping has been done for centuries. Initially, it is done to protect the ears of a pitbull during a dog fight. At present, however, many places are banning the process of ear cropping. Those places are mostly European countries and Canadian provinces. Some examples of places that banned the procedure are New Zealand, Australia, and the UK. But in the United States, ear cropping has mainly been legal up until now. Are you wondering why?

Some associations promoted this practice so that the standards of specific breeds would be maintained. One of which is the pitbull breed. Others desire a particular ear shape for their pitbull, especially when competing in a dog show.

Cropping the ears will only affect the appearance of your dog, nothing more. It will make the fog look fierce and tough. However, as mentioned, it propagated the negative connotation among pitbulls. Based on a study, dogs with cropped ears are perceived as more dominant and aggressive. People would also assume that they are less playful as compared to dogs having natural ears. You may want to read about why do people crop pitbull ears.

Why Not Cut Pitbull Ears?

Ear cropping is a painful procedure. Aside from the fact that it is not beneficial for dogs, it can also cause them harm. There are some risks associated with it, including infection and complications caused by anesthesia. It is also possible that your dog will be traumatized since it underwent surgery early. Also, take note that a dog uses its ears in communicating with its owner and other dogs. If a part of its ear is lost, it may cause misunderstandings leaning to canine fights.

As mentioned earlier, many countries across the country banned ear cropping. But in the US, the procedure is legal despite the intense demands by many people to ban this procedure. Some groups endorse this since cropped ears give certain breeds a distinctive feature. But others oppose the idea since the practice is only done for cosmetic purposes. This has been an ethical issue among veterinarians and international groups for so long. It is considered unethical to allow an animal to suffer and endure the pain to redefine its appearance.

Nevertheless, if you intend to crop your puppy’s ears, make sure that you approach an experienced and licensed vet. Many factors should be considered before cutting the ears of your pitbull. This includes breed, gender, health condition, and age.

After we have discussed why cut pitbull ears, and if you are deliberating on whether or not cropped the ears of your companion, then be reminded of the advantages and disadvantages that come with the procedure. Once you have decided to proceed with the surgery, contact a veterinary surgeon.

Remember that you have to bear all the expenses that come with the surgery as a pet owner. This would also include the costs that will be incurred for the aftercare. Also, take note that it is not guaranteed that you can achieve the results that you want. The ears of your pitbull may remain floppy and not stand upright. My friends, it may be helpful to read about the 21 pointy-eared dogs.