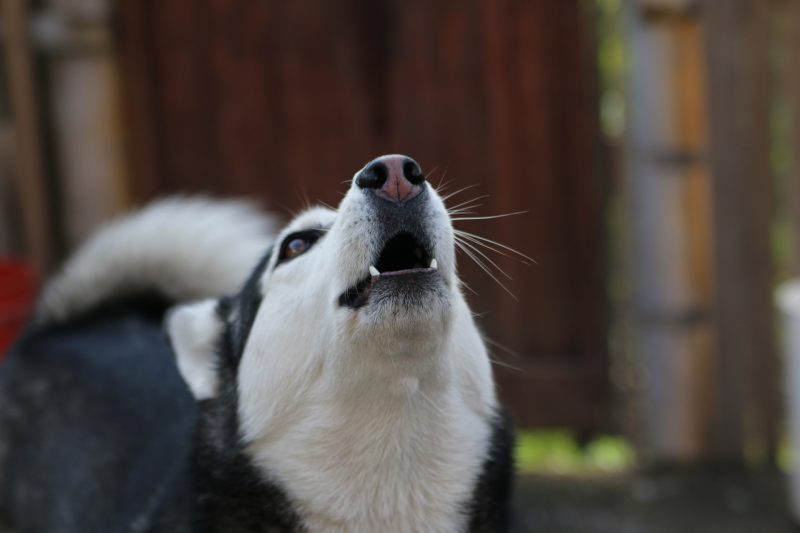 The question is: how to get a husky to howl? Huskies are intelligent and independent dogs. But you need to train them on how they should act.

The training should begin at an early stage. It is ideal to start while your pet is still a puppy.

Once your husky learns about the basics, you can start to teach him some fun tricks. One of which is to how on cue. This training will use the instincts of dogs in communicating with others. Keep reading below to outline how you can use it to make your husky howl when told.

When Do Huskies Start To Get Vocal?

A husky puppy will not begin to vocalize until he reaches the age of one-month-old. Then, you will notice that he will become more vocal in the following weeks since his vocal cords start to develop. For the most part, the sounds learned by a husky come from his mother and siblings, as he knows to communicate with them.

Huskies also use this to respond to any high-pitch noise or the howl of another dog. You can also make the most of the instinctual urge of your pup to react in training.

Ways To Get A Husky To Howl

In making your husky howl, you first need to determine the sounds he responds to. For example, some would howl when they hear high-pitch noises like sirens or alarms. But the sound of howling from a video can be enough to make them how as well. In my case, I would whistle, and my dog will respond with a howl. Below are the other ways that you can try to get your husky howling:

You can encourage the behavior after finding out the methods that can get your dog to howl. For example, give your husky a treat to reward his howling. Do the same with any form of training. With enough encouragement and practice, your dog can learn to howl when you command him to.

Steps To Get A Husky To Howl

Since you already know what can make your husky howl, you should continue to train your pet to learn when is the right time for him to howl. Follow the steps on how to get a husky to howl:

Step #1. Prompt your pet to howl

We have discussed earlier what can trigger your husky to howl. It would be best to evaluate how he will respond and reward him appropriately based on his behavior. The key here is to associate howling behavior with a particular command. This way, your husky will not howl the entire time.

After the howl, you can say the cue word. Then, please give him a treat or praise him. Continue doing this. Eventually, you won’t need to prompt your pet anymore as he will howl when you command. This time, only reward him if he howls after a command.

Step #2. Refine the howling on command

If your pet answers appropriately every time you command, you can refine this behavior. For instance, you will only reward him if he only howls once. Otherwise, he will not get any reward. This is done to prevent nuisance howling. To do this, command your dog, allow him to howl once only, and cut him off by saying good immediately after the first howl.

Also, give him the treat quickly. If your dog does not stop howling, wait until he stops. Then, repeat the same procedure. It would help if you waited for a couple of seconds before treating your dog. Lengthen this time every time you are training your dog. Eventually, your dog will learn to howl just once on command. It may be helpful to read about how to deal with an aggressive husky.

This step is relatively easy. Choose any hand signal and use this when commanding your dog. Remember that this gesture shouldn’t be something you often use so that your dog won’t be confused. Instead, reward your dog with affection and food when he recognizes the nonverbal prompt.

Step #4. Training him to be silent

It would help if you also taught your dog to be silent on cue while training him how. This is important in controlling his vocalizations. In addition, excessive howling should be avoided so that your neighbors won’t be disturbed. Command your dog to howl, and after the first howl, say the word quiet. When he stops howling, reward him. You can also wait until your husky becomes quiet, then hold the treat in front of him. Immediately give him the treat at first and lengthen the time gradually. It’s best to also know how to train a husky to walk on a leash.

Is It Normal For A Husky To Howl?

It is common for huskies to howl by instinct. This act is associated with various reasons, and it is different for each dog. It can be due to anxiety or happiness. Some huskies may also howl just any time they want. You may also want to read more about husky howling.

Making a husky howl requires you to prompt your dog first. However, with the different ways provided above on how to get a husky to howl, you will be able to train your husky to howl on cue.