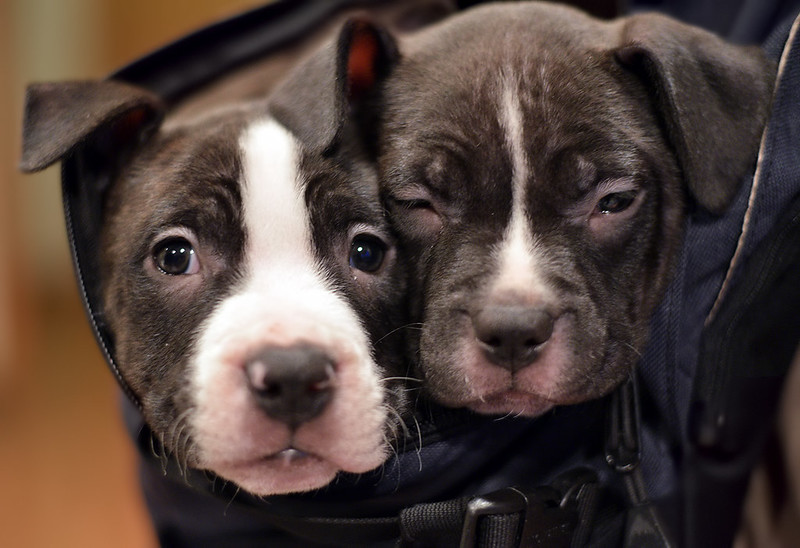 Do you have any idea how many puppies can a pitbull have? A pitbull’s litter size is normally five puppies. Dog owners frequently treat their pets as if they were their children, and they are regarded part of the family. What’s even better is that when these infants become parents and give birth to pups, you’ll be happy a hundred times over.

The typical litter size for a medium-sized dog is five puppies. However, the litter size could be as few as one puppy, known as a singleton.

They can also have up to ten puppies at a time. You should also evaluate the elements that determine the size of your pitbull’s litter and whether or not you should try to breed your dog. Let us learn more about the things to consider when determining how many litters our fur babies will generate when they give birth.

How Many Puppies Can Your Pitbull Have?

Are you wondering how many puppies your pitbull can have? Let us take note of these five awesome facts:

#1. What is the average size of a pitbull litter?

Across all dog breeds, the size of a dog determines the number of puppies in a litter. Cavachons, for example, have very tiny litters, with only two or three puppies on average every litter. Some huge breeds, such as Mastiffs, can have ten or more puppies in a litter. Pitbulls are a medium-sized breed, hence their litter size is in the middle, with five puppies on average. Know how to make a pitbull big.

#2. What is the maximum number of puppies a blue-nosed Pitbull can have in a litter?

The tip of her nose is a vibrant shade of blue. Typically, a pitbull litter has five puppies. Breeding near to ovulation and providing good care to a female dog increases the likelihood of her giving birth to multiple litters. That is, if you’re fortunate.

Look at the litter sizes of your pitbull mother’s own mothers to get an idea of how many puppies to expect. The litter size of a female’s young is usually comparable to that of her moms and grandmothers.

#3. Is it okay if I breed my pitbull and have puppies?

Dog breeding can be a difficult task in general. It takes a lot of time, work, and money to effectively breed and raise a litter of puppies. Don’t breed if you’re unwilling to put in the effort and spend the money. It takes time and money to do responsible breeding, as well as arranging for a probable c-section and doing thorough due diligence on puppy buyers.

All around the country, pitbulls can be found in animal shelters. An unplanned collection of breeding has produced this. Prior to breeding your female Pitbull, make sure you have a waiting list of potential puppy owners set up.

If you don’t prepare ahead of time, you may end up with a litter of eight to nine puppies and only two puppy buyers. It’s not necessary to join the AKC to get started breeding and exhibiting, but you should do so to learn more about the process.

You must, however, be prepared to locate homes for up to ten puppies at a time. Now that you know how many puppies can a pitbull have when she becomes pregnant, there are a few things to keep in mind are listed below:

The more puppies a dam has, the smaller the litter is and the older she is. The first and second litters are frequently smaller than the following litters as well. There will be fewer puppies in a new litter than in a female’s third litter.

Feminine dogs can be fertile their entire lives, but dogs above the age of 8 should not be bred because they are too old to have puppies! In order to maintain peak physical condition before mating, female pitbulls need receive at least 30 minutes of daily activity.

It’s important to know that breeding your Pitbull more than three times isn’t advised. If the dam is very good at producing, it may be appropriate to stop after the fourth litter. Pregnancy, on the other hand, takes a toll on the body and mind of the expectant mother. When thinking about having another litter, put your pitbull mom’s health first.

It’s ideal if your female pitbull is completely healthy before getting pregnant. A healthy weight and having passed all breed-specific health testing are both requirements. Providing your female pitbull with an excessive amount of food will result in her becoming overweight and unable to reproduce. If your pitbull’s collar is getting tight, it’s time to slim down.

Unfortunately, cardiovascular illness runs in the family of pit bulls. Take her to the vet for a checkup to make sure she doesn’t have a heart murmur. Pitbulls who are bred with sick females will have litters as tiny as one or two puppies at the most. Mothers in poor health shouldn’t be used for any reason. You may want to know how to groom a pitbull.

It’s also called “line breeding” in the dog breeding industry. It is common practice to couple together close relatives in order to establish a desired trait, such as a blue nose, extremely strong musculature, or a particular head shape. Examples of this in action include razor-tipped pitbulls. To avoid dogs with birth abnormalities, only experienced breeders should try line breeding. Close line breeding also results in litters with fewer pups, with the average litter size being no more than two or three.

#7. When the breeding season begins

The more puppies your female has, the more often you breed her around ovulation. You can start trying for a kid as soon as you decide on artificial insemination, which your veterinarian can help you with. The more bonds you have to the animals, the greater your chances of having an abundant litter will be in a natural breeding.

While the father’s age has some relation on the size of your Pitbull litter, the mother’s age has a much greater impact. After five or six years, the quality of a dog’s sperm begins to deteriorate. Because of this, there may be fewer puppies per litter even when the female is exceptionally prolific. Some breeders employ artificial insemination to help in the breeding of older males.

You can tell how many puppies can a pitbull have by the aforementioned criteria. While the typical litter size of a pitbull is five puppies, some litters have as many as ten. The size of the female’s litter is mostly determined by her health and the time of year she breeds. Unless you are very convinced there will be enough puppy buyers and ready to commit time and effort to raising the puppies well, you should not breed your female pitbull.

Your pitbull’s mother should be examined by a veterinarian and tested for breed-specific health issues prior to breeding. The best thing you can do for your pitbull is to engage in responsible breeding if you are a fan of the breed. You may be interested to know the 27 dogs that stay small forever.