Are you curious about how many puppies can a Chihuahua have? Well, you will be amazed to know that in each litter, a female Chihuahua will typically have three puppies on average. While the usual litter size is one to three puppies, older Chihuahua dogs can have five or six puppies.

Like all other dogs, Chihuahuas can become pregnant, but their small stature puts them at a higher risk of birth difficulties than larger breeds. 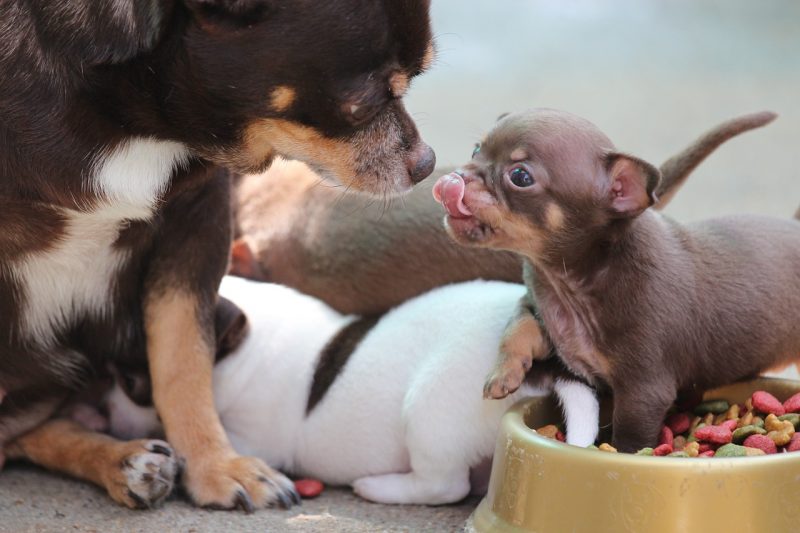 Knowing the number of puppies a Chihuahua can have in a litter will help you devise a birthing strategy that will reduce the likelihood of significant difficulties. Read this article further to find out what to expect when your Chihuahua becomes pregnant!

How Many Puppies A Chihuahua Can Have?

In a single litter, a Chihuahua will give birth to three puppies on average. However, some Chihuahuas can only have one puppy at a time. So, the average Chihuahua litter size ranges from one to three puppies every litter. Older Chihuahuas tend to have larger litters of five to six puppies after their first litter. Most Chis have their most special litters on their third or fourth pregnancy, following which the litter size gradually decreases.

The main disadvantage of a larger Chihuahua litter is that both the mother and the puppies may develop health problems. Of course, this isn’t always the case, but with larger litters, there’s always the possibility that one or more puppies will be underweight and weaker than the rest.

These puppies require additional assistance and support from their mothers, and they may have difficulty getting enough milk and nutrients from her. In this situation, you, as the owner, will need to bottle feed and nurse the puppy until it is fully grown and developed.

Chihuahuas Have How Many Puppies For The First Time?

Chihuahuas have small litters in general, but the litter size will be even smaller the first time a Chihuahua gives birth. So expect no more than three puppies the first time you see your Chihuahua, and it’s far more likely that your Chihuahua will only have one youngster in her first litter. I hope now you have the answer to your question; how many puppies can a chihuahua have?

It’s unusual to see a Chihuahua have more than three puppies in her first litter. The litter’s number of puppies follows a bell-shaped curve. During the first few pregnancies, the female Chihuahua will have a tiny litter. They may then have a large litter of more than three puppies during their third or even fourth pregnancy. Her litter size may fall again by the fifth or sixth pregnancy. It’s a good idea to read about how many puppies can a Chihuahua give birth to.

A Chihuahua Can Have How Many Puppies Every Year?

Because of their size, Chihuahuas should only have one litter of puppies every 12 months. Before permitting the female Chihuahua dog to mate again, a responsible dog breeder should allow her to rest for at least a year. Giving your female Chihuahua at least a year before mating again will give her body the time it needs to properly recuperate before becoming pregnant and expecting another litter of puppies.

Because Chihuahuas are little dog breeds, giving birth naturally can be difficult for the mother and her babies. As a result, many female Chihuahuas will give birth to their babies via cesarean section.

It’s a good thing to know how long a Chihuahua is pregnant for if you have a pregnant Chihuahua. Consult your veterinarian about if you should take your Chihuahua to the vet during her labor. Because female Chihuahuas have narrow hips and their puppies’ heads are likely to be enormous, most veterinarians may advise you to bring your Chihuahua in for a C-section.

While a female Chihuahua typically has 1 to 3 puppies in a litter, this does not rule out the possibility of an exception. For example, consider the story of a one-and-a-half-year-old female Chihuahua who gave birth to 11 puppies on National Puppy Day in 2018!

What Is The Length Of A Chihuahua’s Pregnancy?

Because most female Chihuahuas are expected to give birth via cesarean section, dog breeders or owners of unexpected Chihuahua pregnancies must be aware of the due date so that the C-Section can be scheduled ahead of time. The typical length of a pregnancy is 63 days, but it can be as long as nine weeks.

Knowing how many puppies can a Chihuahua have, will help you prepare for birth, whether your Chihuahua is now pregnant or you want to breed her shortly. Chihuahuas can have problematic pregnancies as a toy breed, and the majority of them give birth via cesarean section. To reduce the risk of problems, keep the following in mind: