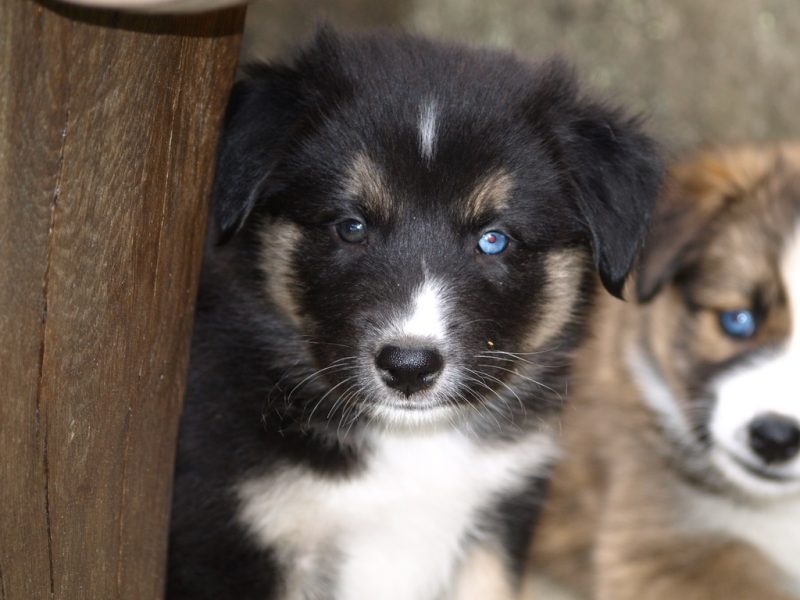 Mostly, it depends on whether it is the first letter of the Aussie or if the female has had multiple litters before.

Most often than not, the first few litters have a lower number of pups. This can go up or down on the following litters. The number of puppies will also vary depending on several factors, including size, age, health, etc. Let us discuss more on this below. Keep reading!

Misconceptions About The Litter of Australian Shepherds

So, how many litters can an Australian shepherd have? Some people think that female Aussies will get pregnant anytime. But it is not the case. Others also believe that Aussies would heat about 3-4 times every year, but it’s also not true.

Typically, it would range from 6 up to 9 months. Another misconception is regarding the size of the litter. Some would think that it would contain about 15-20 puppies.

But there is no definite number of puppies per litter. Nonetheless, size is an essential factor—the bigger the Australian shepherd, the bigger its litter size. Age is also a crucial factor. At first, the litter will have a lesser pup. But the number will eventually increase as the female dog gets older. Learn more about what is a toy Australian shepherd.

Aussies can have three litters every year and will be able to breed until death since dogs do not have a menopausal stage, unlike humans. But for the majority of professional breeders, the breeding can occur between three to eight years. It will take a toll on females who carry a litter and give birth just like it does to humans. Although it would be amazing to have new puppies, you have to be cautious as it will affect the health of the female dogs. Also, dogs can produce thousands of offspring, which is why dogs are fixed to control the population. They are only bred professionally for a specific reason.

According to the experts and real Australian shepherd owners, the average age for Aussies to breed is between 2 and 5 years old. This is considered quality breeding. Basically, owners do not start breeding their dogs until they are about two years old, and breeding them will stop when they reach the age of six. They would also stop breeding if there is an issue that will occur.

When Can Your Australian Shepherd Have Puppies?

Male Aussies would attain full sexual maturity when they reach the age of 16 months. However, note that they can become fertile in as early as six months, so you need to be careful starting when your pup is young.

Most vets would recommend not to get the male Aussie until he turns one year old. This is to allow your dog’s muscle and bone structure to develop completely. With that being said, you need to watch your dog closely for six months to avoid accidental inseminations.

On the other hand, female Aussies reach full sexual maturity when they turn two years old. At this age, they will be prepared for breeding. The bones of female Australian shepherds at this age would have grown completely. During this point, they will be the strongest.

How Many Puppies Are There On The First Litter Of Australian Shepherds?

Full-size Australian shepherds can have up to seven puppies on the first litter. However, this is dependent on various things. If the dog is smaller, the puppies would be around five puppies or even less since it’s the first litter.

The pups of Australian shepherds are amazing, but in order to have a longer life span, the puppies should have good genes and shots. The same is true with any other pure breed. With that being said, you need to ensure to go through the sires’ history before you get a puppy. In other words, it would be best that you look into its father and mother to ensure that it is a pure breed. Fortunately, researching about this is relatively easy these days. It is also recommended to find a local breeder in your local area so that it will be easy for you to go to them whenever you are dealing with any issue.

Another thing to remember when looking for a puppy is to take time and be patient. I know you are excited to bring home the puppy immediately. Still, there are a lot of Australian shepherd puppies to choose from.

In a year, Australian shepherds can have up to three litters. Dogs can breed until they die. But of course, you shouldn’t just let your dog get pregnant if you know that you cannot take care of the puppies.

Most vets even recommend having your dog neutered to avoid accidental breeding because this often leads to an increased population of pups in the community centers. Hopefully, this post about how many litters can an Australian shepherd have provides you with the information you need and highlights the importance of responsible parenting. You may want to read related articles; know how to take care of an Australian shepherd puppy and why do they dock Australian shepherd tails.